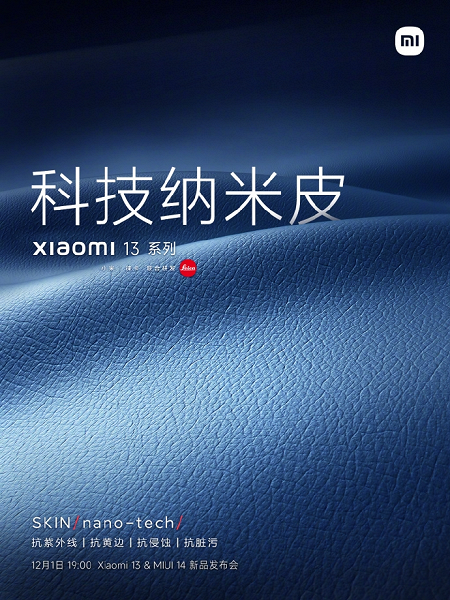 Today, Xiaomi officially announced that the new Nano Skin technology will be applied in the Xiaomi 13 series.

In recent years, leather has been increasingly used as a material for the back of mobile phones, taking its share alongside plastic, metal, glass and ceramic. It is pleasant to hold such a smartphone in your hands, it does not slip, however, the usual leather panel of a smartphone is prone to yellowing and dirt as a result of prolonged use.

According to the official statement, this new Nano Skin material simultaneously provides protection against wear, discoloration and dirt, and retains the feel of genuine leather when used.

Previously, a poster was published that confirms the release date of Xiaomi 13 smartphones and contains partial images of them. Xiaomi 13 is expected to get a flat screen, while Xiaomi 13 Pro will be equipped with a curved display.

The company has confirmed that the smartphone will meet the IP68 dust and water resistance rating. In addition, it is known for sure that Xiaomi 13 will be presented on December 1 this year, that is, next Thursday.