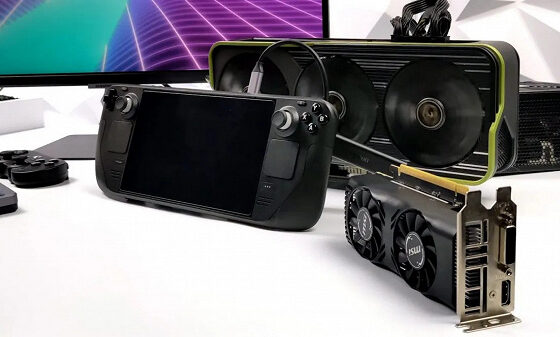 What happens if you connect a Radeon RX 6900 XT to the Steam Deck? It turned out that this is possible, and the performance gain is simply huge.

As you know, Steam Deck is positioned by Valve not only as a game console, but also as a full-fledged portable PC. And the Radeon RX 6900 XT has already been connected to this PC.

To begin with, it should be noted that it is impossible to simply take and connect a discrete 3D card to the console, since the latter does not have a Thunderbolt port. But inside there is a PCIe slot for an M.2 SSD. And it is to it that, using a special adapter, you can connect a video card, powered by an external power supply. At the same time, the console system needs to be transferred to microSD, but this is not a problem for the experiment.

So how much has the performance increased? In 3DMark Fire Strike we are talking about 26,885 points against 4856 points that the console itself is gaining. That is an increase of about 5.5 times. In TimeSpy, an external graphics card allows you to increase performance by an order of magnitude: from 1576 to 15,579 points!

In games, the eGPU console handles projects even at 4K resolution. In The Witcher 3, she demonstrates more than 100 fps, in GTA 5 – an average of 73 fps. In Elden Ring and Cyberpunk 2077, the console showed 47-70 fps, but already in Full HD.

Of course, this is purely an experiment, and it is unlikely that anyone will want to use such a bunch. In addition, only Radeon video cards can now be connected to Steam Deck.