The Ryzen 7000U mobile APU line will have processors on three different architectures. Ryzen 5 7530U will get Zen 3+ cores

The line of Ryzen 7000 mobile processors, like the two previous generations, will include both really new APUs and solutions on the old architecture.

This is indicated by the Ryzen 5 7530U, which lit up on the Web. Thanks to AMD’s new naming convention, one name is enough to tell if it’s a Zen 3 or Zen 3+ APU. From the rest, we only know that this is a six-core processor, also equipped with a GPU with 12 CU units, that is, with 768 stream processors. By the way, this speaks in favor of the Zen 3+ architecture, because the Ryzen 6000U has such an iGPU.

Thus, the main line of Ryzen 7000U will include both new processors based on the Zen 4 architecture, as well as solutions from the previous generation. 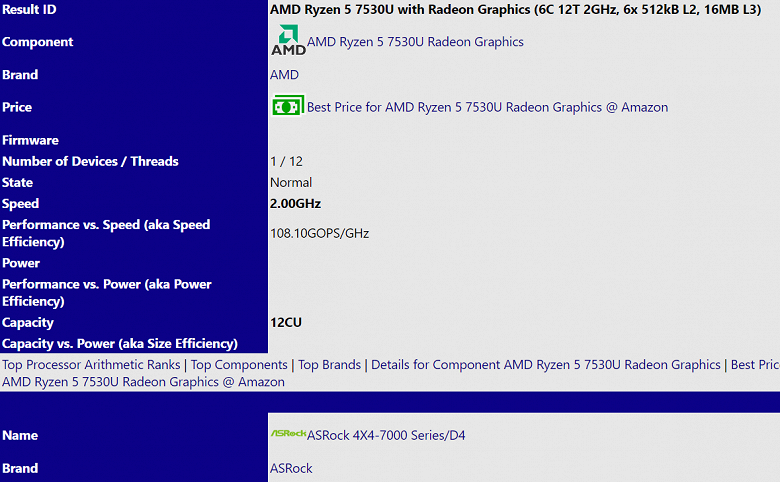 In fact, it will be even more interesting, because in fact the Mendocino APUs, which are based on Zen 2, will also enter the same line, and it turns out that the Ryzen 7000U will be the first line to include three generations of processors. But here it is worth noting that the Mendocino APUs will have a positioning different from the main Ryzen 7000 line, so they are unlikely to intersect within the same laptop models. In addition, Mendocino cannot be called old renamed APUs, since they only have processor cores, and iGPUs are as modern as possible.

AMD first introduced the old APU approach in the new line with the release of the Ryzen 5000U, so when choosing a laptop with Ryzen processors, you need to carefully approach the process. We also recall that Intel decided to go even further and will do exactly the same, but already in the desktop segment: in the Raptor Lake line, only older CPUs will be new, while all the rest will be renamed and, possibly, slightly accelerated models from the Alder Lake line.