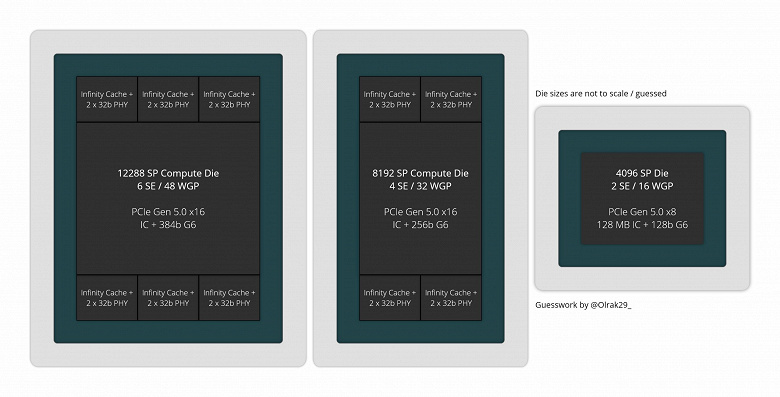 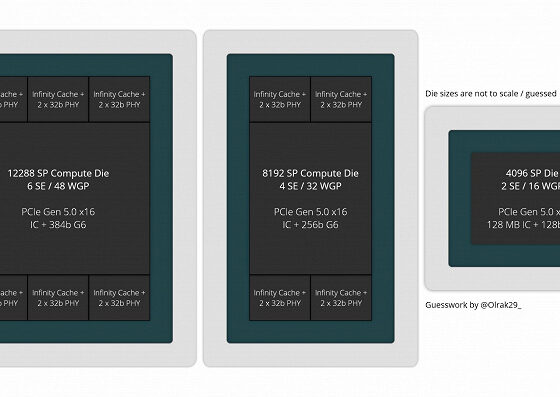 The Radeon RX 7900 XT video card can get an unusual GPU, consisting of 10 chips. But only one will be directly graphic

According to recent data, the top GPU Navi 31, on which the Radeon RX 7900 XT graphics card (the name is supposed), can get a huge amount of special cache memory Infinity Cache.

Navi 21 has 128 MB of such memory, and Navi 31 can get 384 MB, that is, three times more. Moreover, it will be implemented differently than in the current generation of AMD cards.

If earlier all the leaks and rumors indicated that the Navi 31 would be a dual-chip GPU, then the latest data speaks of a monolithic crystal. However, now sources also say that MCD (Multi-Cache Dies) chips with Infinity Cache cache memory will be located around the GPU or on top of it. There will be six such chips in total, and three of them can receive additional chips through 3D V-Cache technology. As a result, the GPU will have 256 MB of Infinity Cache and another 128 MB through 3D V-Cache chips. That is, in total it is 384 MB of cache memory. In addition, this configuration means that the actual GPU will consist of 10 chips.

Similar information has already hit the Web before, so there is a possibility that this is exactly what the Navi 31 GPU will look like.