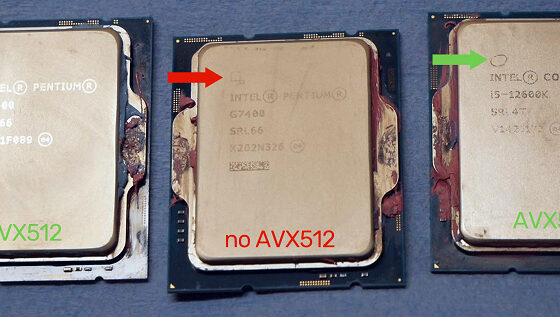 The mark on the cover of the Intel processor will distinguish models with great hidden potential. It became known how to determine the CPU with support for AVX-512

The web described a way to quickly visually distinguish an Intel Alder Lake processor with support for AVX-512 instructions from a version without such support.

As it turned out, the new revision has a new logo on the lid. At first, some users even thought that these were fake CPUs, but there are no problems here.

Processors of the new revision with a new logo just do not have support for AVX-512 at the hardware level. Intel started shipping these CPUs in March, so it’s likely not so easy to find the old revision on sale, but there’s still a chance.

Recall that Alder Lake CPUs were originally released with support for AVX-512 instructions, although Intel did not officially say anything about this at first. Later, the company released a BIOS update for motherboards, which blocks this mode of operation, and since the beginning of spring, it began to supply a new revision, where support for these instructions is already missing at the hardware level.

Not everyone needs AVX-512 support, but in a number of applications in this mode, this set of instructions makes the processor two to three times more productive, but this will have to be paid for by greatly increased power consumption.