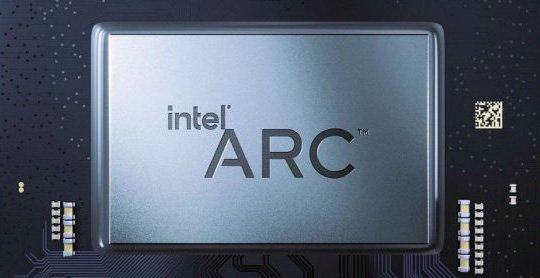 Two test results of the promising flagship mobile 3D accelerator Arc A770M, aimed at gamers, have appeared on the Web. Interestingly, it was tested in two devices: the NUC12SNKi72 mini PC and the large 17.3-inch Clevo X270PTA laptop. In both cases, more than 10,000 points were obtained in the Time Spy test, which is better than the result of the GeForce RTX 3060. Mobile, of course.

The frequencies are the same in both cases: the average GPU frequency is 1710-1714 MHz, the maximum is 2050 MHz. The GDDR6 memory frequency in both cases was 2.0 GHz (memory capacity – 16 GB). Interestingly, with the same parameters and results, the 3D accelerator in the NUC got warmer (68°C) than the one in the laptop. Cooling in a mini-PC is clearly better organized. 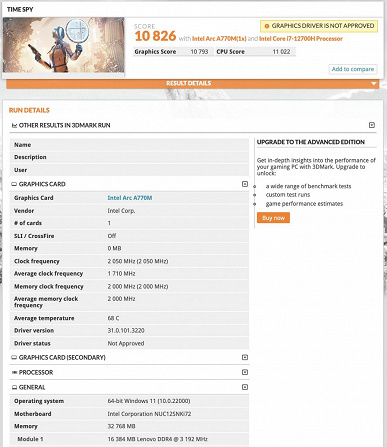 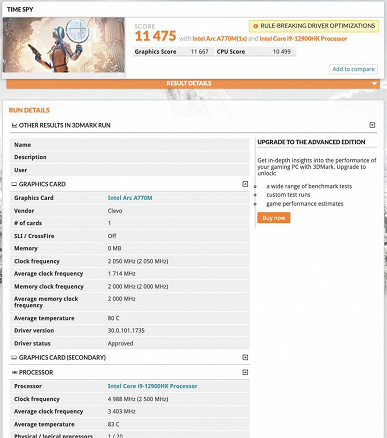 As for the difference in results, it is explained by the fact that the NUC, unlike the laptop, was tested with non-optimized drivers. It should be noted that if in 3DMark the Intel Arc A770M turned out to be faster than the GeForce RTX 3060, this does not mean at all that in real applications (games, of course), there will also be superiority for the Intel GPU. Alas, the company is not doing very well with software optimization. It is also possible that laptops with Arc A770M may be noticeably more expensive than laptops with GeForce RTX 3060.