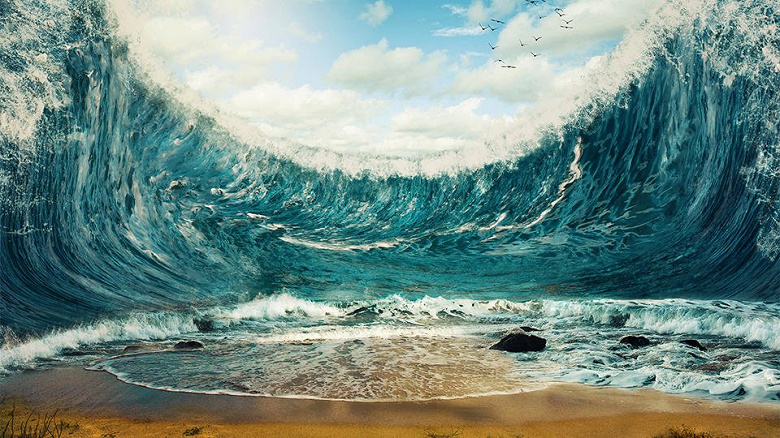 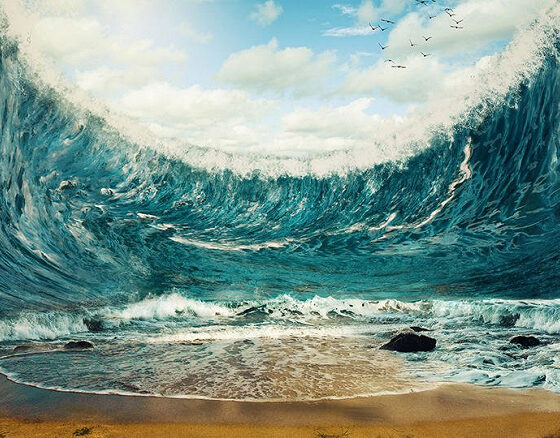 The asteroid that killed the dinosaurs caused a tsunami wave up to 4.5 km high

Geologists have found that the fall of an asteroid at the end of the Cretaceous period not only gave rise to the giant underwater crater Chicxulub, but also caused a “global tsunami”, whose waves reached a height of 1.5 and 4.5 km. This was told by scientists from the University of Michigan.

“This tsunami was strong enough to destroy the sediments at the bottom of the Earth’s oceans on half the globe, which created a kind of “gap” in the geological record of the planet. The traces of such destruction discovered by us in different parts of the world confirm the results of our model calculations.“, – said researcher at the University of Michigan in Ann Arbor (USA) Molly Range.

At the end of the Cretaceous period, approximately 65.5-66 million years ago, an asteroid with a diameter of about 10-14 km fell to Earth, leaving the Chicxulub crater with a diameter of 180-200 km in southern Mexico. Scientists have no doubts about the fall of the asteroid, but its role in the extinction of dinosaurs and marine reptiles, as well as the exact consequences of this cataclysm, are still a matter of controversy.

Range and her colleagues discovered the first evidence that the fall of the asteroid caused not only a sharp cooling of the climate and acidification of the world’s oceans, but also gave rise to a super-powerful tsunami, which in its strength was about 2.6 thousand times greater than the 2004 disaster off the coast of Indonesia, by far the deadliest tsunami in human history.

Scientists came to this conclusion while testing the operation of a computer model that calculates in as much detail as possible the process of formation of the Chicxulub crater and the consequences of this event on the nearest land and seabed. In the course of these calculations, scientists found that the fall of an asteroid with a diameter of 10-14 km gave rise to a powerful global tsunami that covered a significant part of the area of ​​the World Ocean.

The height of the first tsunami waves, according to scientists’ calculations, should have reached about 4.5 km, which is associated with the release of a large amount of rock fragments from the point of impact of the asteroid to that part of the ocean floor where the Chicxulub crater arose. These waves, despite their record high height, quickly subsided, but only 10 minutes after their appearance, they were followed by a smaller, but much larger circular tsunami wave, whose height reached 1.5 km.

According to the calculations of geologists, this water shaft accelerated to a speed of 720 meters per hour and traveled about 6 thousand km. in all directions from the point of impact of the asteroid, which led to the exposure and destruction of a significant part of the sediments of the late Cretaceous period at the bottom of the future Atlantic, as well as on the territory of the future land in modern North America, as well as in most other regions of the world, with the exception of the southern coasts of Europe and Indian Ocean.

Guided by these considerations, the researchers studied 165 marine rock samples from the late Cretaceous period collected in different regions of the world. In total, Range and her colleagues were able to find traces of a tsunami in 120 of these samples, which confirmed the global nature of the tsunami generated by the birth of the Chicxulub crater. In the near future, scientists plan to calculate how this cataclysm affected the coastal regions of all continents of the world.