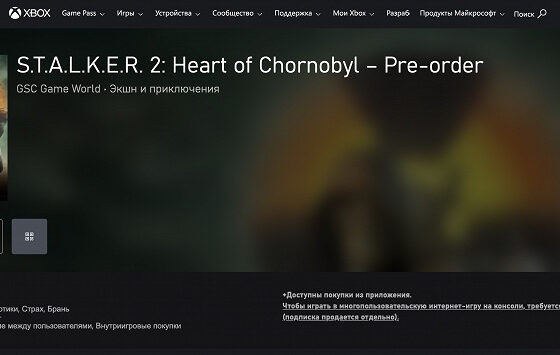 STALKER 2 pre-order has been removed from the Xbox Store. A day later, the authors explained the reason

On the night of August 1-2, the ability to pre-order any editions of STALKER 2 was removed from the Xbox store, although the game page itself remained. But in the Steam, EGS and GOG stores, this opportunity has been preserved. Users began to assume that the game was canceled, postponed, or something else happened.

At first, the developers did not comment on the situation in any way, and also did not give explanations. And only about a day later, the data appeared on the official Discord channel of the creators.

“According to the rules of the Xbox store, until we announce the exact release date, pre-orders will not resume. As soon as the date is known publicly, the pre-order button will become available to you again, ”said the community manager.

Given that the game has already been moved to 2023, but no exact date has yet been announced, such a move seems quite logical.

Earlier, a pseudonymous blogger leaked an early version of the STALKER: Shadow of Chernobyl console build to the network.