Some new Intel CPUs will have a much lower base frequency than their respective predecessors. Gigabyte reveals 22 Raptor Lake processors

Intel has so far only unveiled a handful of older Raptor Lake processors that haven’t even gone on sale yet, but today Gigabyte accidentally or not revealed a lot of unannounced CPUs.

On the company’s website, the Z790 Aorus Master motherboard has 22 next-generation processors in the compatibility list. Unfortunately, the specifications are far from complete. In particular, the number of cores is not indicated, and the frequency is only the base one.

As a result, in this case, we are most interested in the names, but in general they are the same as in the previous generation, only the number 12 has changed to 13.

Recall that the new line of Intel CPUs will consist of both really new CPUs (from Core i5-13600K and higher) and Alder Lake processors with new names (all the rest). That is, the conditional Core i3-13100 will be an almost complete copy of the Core i3-12100, except that, as we now know thanks to Gigabyte, the base frequency of the new product will be 100 MHz higher. 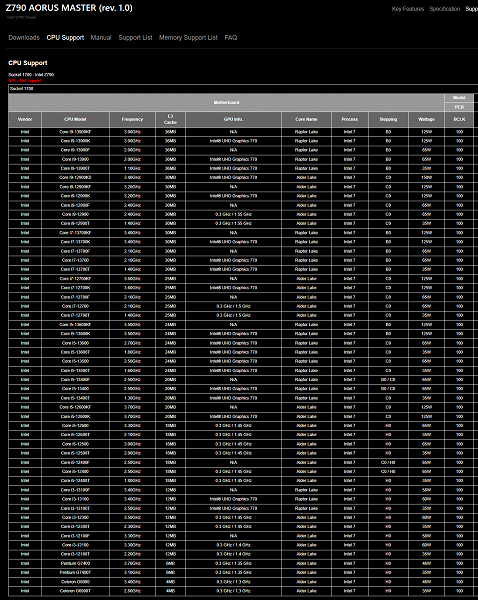