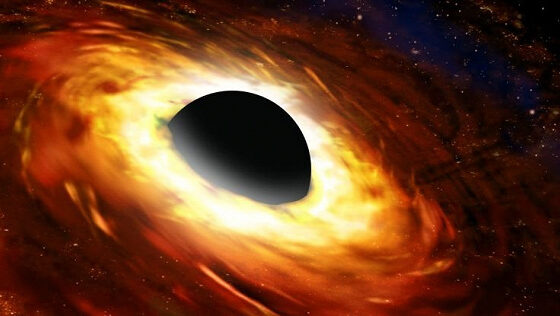 Scientists have discovered a sleeping black hole outside our galaxy for the first time. Its mass is nine times that of the Sun.

An international team of astronomers has discovered an inactive stellar-mass black hole outside the Milky Way for the first time. The discovery was made during observations of large stars in the Large Magellanic Cloud, a satellite of our Galaxy.

“We have spent more than two years searching for binary star systems that have a dormant black hole. I was very pleased when we discovered the VFTS 243 system, which is currently the most convincing candidate for the role of such an object. ”said European Southern Observatory (ESO) scientist Julia Bodensteiner.

Bodensteiner and her colleagues have discovered for the first time an extragalactic stellar system whose black hole almost does not pull the matter of its neighbor onto itself and does not show visible signs of activity in the X-ray frequency range. They made this discovery while observing several large stars in the Large Magellanic Cloud.

This galaxy hosts the so-called Tarantula Nebula, one of the youngest and largest star-forming regions in the immediate vicinity of the Milky Way. Inside this gas and dust cloud, large stars are constantly being formed, whose mass is tens and hundreds of times higher than the sun. Such large luminaries very quickly exhaust their reserves of hydrogen and turn into black holes.

Altogether, scientists have tracked thousands of stars in the Tarantula Nebula, hoping to find characteristic fluctuations in their spectrum structure and speed that would indicate the presence of an invisible and large satellite. The scientists detected the fluctuations while observing the star VFTS 243, which has about 25 times the mass of the Sun.

As astronomers have discovered, this luminary revolves around a “sleeping” black hole, whose mass is at least nine times higher than that of the Sun. Both components of the star system VFTS 243 are located at a small distance from each other, as a result of which the star makes a complete revolution around the black hole in just 11 incomplete days.

According to astronomers, the absence of visible traces of a supernova explosion in the VFTS 243 system and the large mass of the black hole indicate that it arose as a result of the direct gravitational collapse of a large star. This makes the black hole very interesting to study.