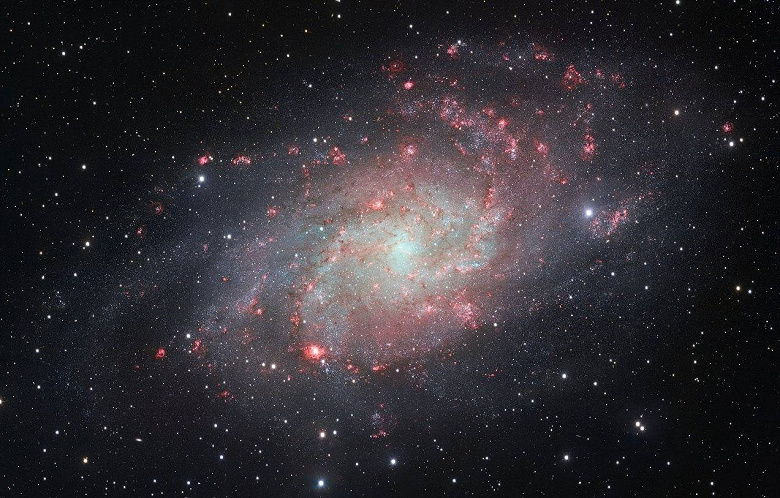 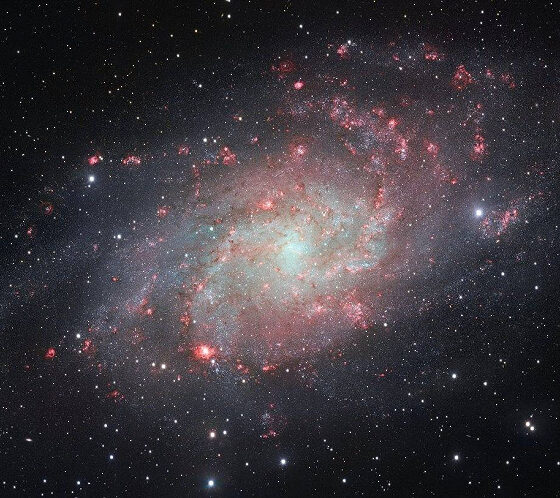 Astronomers have found that the nearby spiral galaxy M33 in the constellation Triangulum has powerful “galactic winds”. This discovery was the first indication that such streams of hot gas exist in small galaxies. The work was published in Monthly Notices of the Royal Astronomical Society. The results were reported by the Max Planck Society of the German Institute for Radio Astronomy (MPIfR).

“This is the first time we have witnessed the formation of powerful winds in such a small spiral galaxy. Their existence was indicated by anomalies in the behavior of cosmic rays in the presence of powerful interstellar magnetic fields – these accelerated particles gained speed in these fields, and did not lose them, as it should happen in the absence of “galactic winds””, said MPIfR researcher Fatima Tabatabey.

The so-called “galactic winds” are fast streams of hot gas thrown out of the galaxy and forming a hot bubble around it. These winds interfere with the influx of cold matter from the interstellar medium, so today they are considered one of the main reasons why about half of the galaxies nearby have stopped producing new stars.

In the past, Tabatabey and her colleagues note, astronomers believed that such processes only affected relatively large elliptical and spiral galaxies, since powerful “galactic winds” do not occur in smaller clusters of stars. Astronomers from Iran, Europe and the US found out during observations of the neighboring galaxy M33 that these ideas were erroneous.

This galaxy is located in the constellation Triangulum, at a distance of 2.73 million light years from the Milky Way, so it can be seen with the naked eye. In terms of its mass and number of stars, M33 is several times inferior to its neighbors, which makes it the smallest spiral galaxy in the immediate vicinity of the Milky Way.

Observations of M33 with the VLA radio telescope, the researchers say, revealed a highly unusual feature of cosmic rays, which were generated by supernova explosions, black holes and other compact objects in this galaxy. They accelerated under the influence of powerful interstellar magnetic fields, and did not slow down their movement as a result of electromagnetic interactions and the release of energy in the form of flashes of light and radio waves.

This was most characteristic of those central regions of M33 adjacent to the supermassive black hole, and those regions of the galaxy where the densest centers of star formation were located. A similar pattern, according to astronomers, indicates that powerful “galactic winds” served as the source of cosmic rays and the reason for accelerating their movement, in the formation of which, as scientists suggest, these charged particles can also be involved.

The discovery, according to Tabatabey and her colleagues, suggests that “galactic winds” played an important role in slowing down the circulation of matter and star formation not only in large, but also in small galaxies in the early epochs of the existence of the Universe. This must be taken into account when calculating the process of the chemical evolution of the Universe, the astronomers summed up.