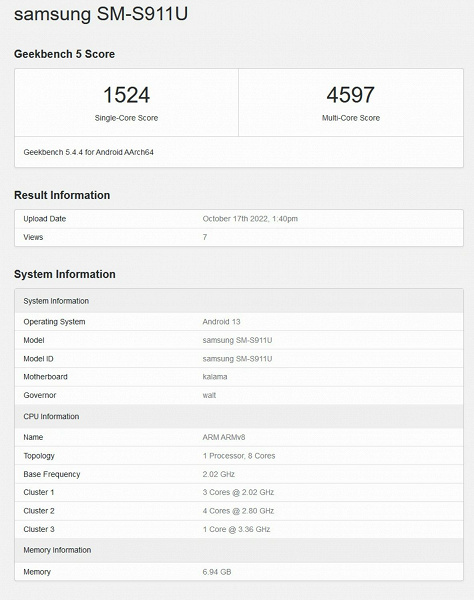 Samsung Galaxy S23 first tested in Geekbench. And this is also the first test of the Snapdragon 8 Gen 2 platform

The official premiere of the Qualcomm Snapdragon 8 Gen 2 flagship single-chip system will take place in a month, but the first phone based on it has already been tested on Geekbench. This test was also the first for the Samsung Galaxy S23.

In the benchmark, we tested a Samsung device with the catalog number SM-S911U, under this designation one of the variants of the Galaxy S23 is hidden. There is no SoC designation, which is understandable, but there is its code name – kalama. The platform parameters revealed by the benchmark leave no doubt that kalama is exactly the Snapdragon 8 Gen 2.

As for the performance gain, it is there, although it cannot be called big: 1524 points in a single-threaded test and almost 4600 points in a multi-threaded one – this is 14 and 9 percent more than the result of Snapdragon 8 Gen 1. Perhaps, as the platform and drivers are brought up to the results will get better, but certainly not drastically.

As for the Galaxy S23 itself, it received 8 GB of RAM and Android 13 preinstalled. Both are expected.