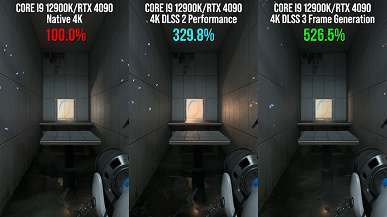 Nvidia DLSS 3 technology has quality issues with very fast moving objects, but this is not critical

Nvidia says that DLSS 3 technology is capable of four times the performance, and even the entire GeForce RTX 4090 versus RTX 3090 Ti comparison is based on DLSS 3. But is the new supersampling technology really that good? 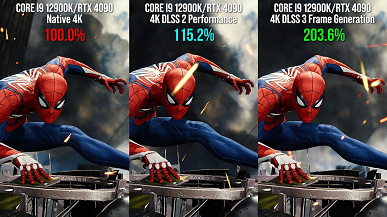 Digital Foundry already has a copy of Nvidia’s new adapter. Reviews can not be published yet, but here’s something they told us about DLSS 3.

The authors tested the card in Cyberpunk 2077, Spider-Man Remastered and Portal RTX. First, let’s take a look at the performance gain from enabling DLSS.

Nvidia still forbids specifying the number of frames per second, but we can see an increase. And we can see that it can be huge. In Portal RTX, enabling DLSS 3 results in over five times the performance. At the same time, in Spider-Man Remastered we are talking about only a twofold increase, although this is also a lot. In addition, DLSS 2 in this case practically does not help to increase performance at all due to the nature of the processor-dependency of the game itself.

But the quality is not so clear. Recall that DLSS 3 draws entire frames, not individual pixels, like DLSS 2. Here’s what the authors say about this.

Extremely fast movement, especially close to the camera, can cause artifacts. In addition, UI elements do not have motion vectors for the technology to track, which also has problems. However, in real gameplay, the problems are minimal. Acceleration brings most games to 120 fps or higher, which means that the time of each frame is very low. In the meantime, remember that these generated frames are sandwiched between “perfect” traditional frames. In our video content, you’ll see 120fps captures running at half speed – even there the visual breaks are hard to see. Only with long-term observation can one tell where DLSS 3 frame generation failed.

That is, there are problems, but in reality it is very difficult to notice them. At the same time, the performance gain can be such that modern games, even at 8K, will probably work fine on the GeForce RTX 4090 with active ray tracing.