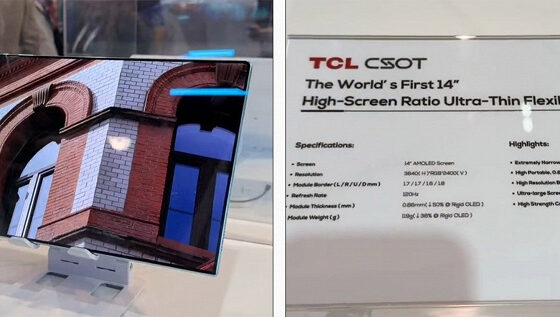 Neither the iPad Pro nor the Samsung Galaxy Tab S8 Ultra has this. TCL showed a prototype tablet with a record-breaking thin bezel screen

TCL brought to the CES 2023 exhibition, which is taking place these days in Las Vegas, a prototype of a promising flagship tablet. The parameters of the hardware platform were left behind the scenes, but the company spoke about the most important thing – the screen.

The 14-inch AMOLED panel is characterized by a resolution of 3840 x 2400 pixels and a frame rate of 120 Hz. But most importantly: the screen occupies 94% of the front panel area! This roughly corresponds to what can be seen on TVs with a minimal frame, and here it is really minimal: neither the flagship of Apple, nor the flagship of Samsung (nor, by the way, the just introduced Lenovo Tab Extreme) can not be compared. True, in the case of TCL, we are not talking about a serial device.

However, it’s one thing to show a device with a minimal frame, and another thing to make it comfortable to use. Tablet manufacturers are deliberately not in a hurry to get rid of the frame, thereby allowing the user to hold the device as they like without fear of provoking unwanted touch screen responses.