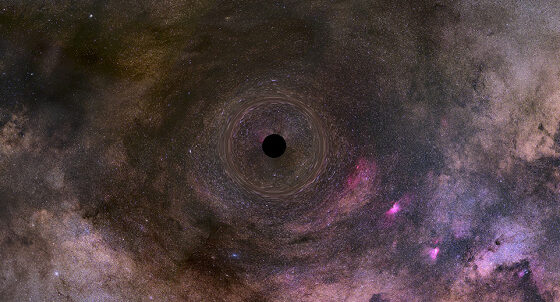 NASA’s Hubble robotic observatory in low Earth orbit has provided the first direct evidence of a lone black hole drifting through interstellar space by measuring its mass and precise location for the first time. Until now, the masses of black holes have been determined indirectly, relying on their interaction with companions in binary systems or with stars in the cores of galaxies.

Hubble made observations of the Sagittarius-Carina spiral arm of the Milky Way, which made it possible to detect a black hole passing through this arm at a distance of about 5 thousand light-years from Earth. At the time of its formation millions of years ago, this black hole was pushed by a supernova explosion due to an asymmetric release of gravitational waves, after which it went on a long flight through the entire galaxy. “Black holes roaming our galaxy are born from rare monstrous explosions of massive stars that make up less than one thousandth of the entire stellar population of the Milky Way, they are at least 20 times more massive than our Sun. These stars explode as supernovae, and the remnants of their cores collapse under the influence of gravity, shrink and turn into black holes. Since the explosion does not turn out to be perfectly symmetrical, the black hole can experience a push and fly due to recoil through the entire galaxy. ”describes the appearance of NASA’s rogue black holes.

Hubble is unable to photograph a black hole directly, as it absorbs all the light falling on it, however, the powerful gravity of these objects distorts the surrounding space, and the light coming from the background stars is bent and amplified in places when the black hole passes in front of them, which gives astronomers the opportunity to record its presence. This effect is called the microlensing effect and can be used to measure the mass of a rogue black hole.

Hubble observed the passage of a black hole in front of the stars for 270 days, but then it took scientists another six years to process all the data. Researchers now believe that it is a black hole, but the possibility remains that the object is a neutron star. The estimated mass of an invisible compact object is between 1.6 and 4.4 solar masses. If it ends up in the upper part of this mass range, then it should be considered a black hole, otherwise it will be just a neutron star. According to astronomers, the object still has a fairly large mass and moves through the Milky Way at a speed of over 160 thousand km / h.