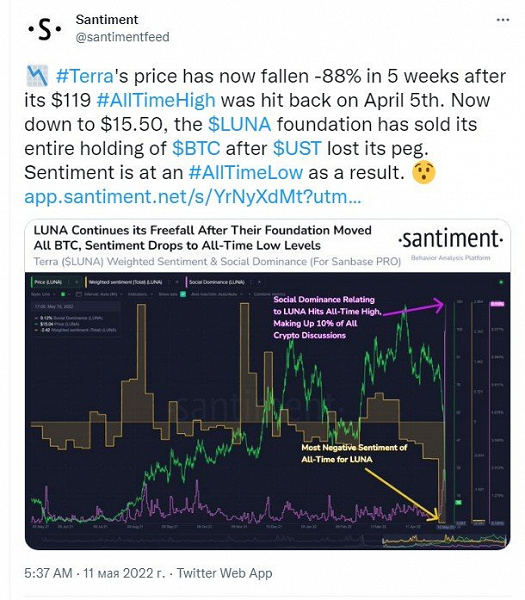 On Wednesday, May 11, the algorithmic stablecoin of the Terra ecosystem – TerraUSD (UST) – continued to lose its peg to the US dollar (the most important characteristic for every stablecoin). The LUNA cryptocurrency used to issue it collapsed by more than 90%

LUNA became the first coin in history to enter the top 10 cryptocurrencies, and today it has depreciated by 95%. Investors are actively withdrawing funds from this utility token of the Terra blockchain, due to the collapse of the main model of the ecosystem.

Terra called its goal the creation of a bridge between traditional finance and cryptocurrencies. To do this, the project has launched several stablecoins, including USD-pegged UST. The algorithm of interaction between UST and LUNA, the internal coin of the system with a floating rate, is responsible for the 1: 1 rate compliance. Because of this, UST is called an algorithmic or decentralized stablecoin.

The Anchor protocol operating on the blockchain guaranteed a return of 20% per annum for UST staking.

This model had two problems: First, Anchor’s earnings covered only 30% of the staking earnings paid out. And the second – the peg to the dollar was provided by the arbitrage algorithm, which to a certain extent depended on the demand for LUNA. Arbitrageurs could change to Terra UST at the rate of 1 to 1 with the dollar, through this utility token.

The initial reasons for the decline in UST to $0.98 and below were a sell-off in the cryptocurrency market and the actions of an unknown seller who sold a $300 million stablecoin on May 8. This was accompanied, probably on purpose, by a deliberately provoked discussion of the weakness of UST in social networks, which led to panic and significant pressure from other market participants. For a while, market makers tried to hold back the UST rate by selling Bitcoin and other crypto assets, but this did not save the situation. 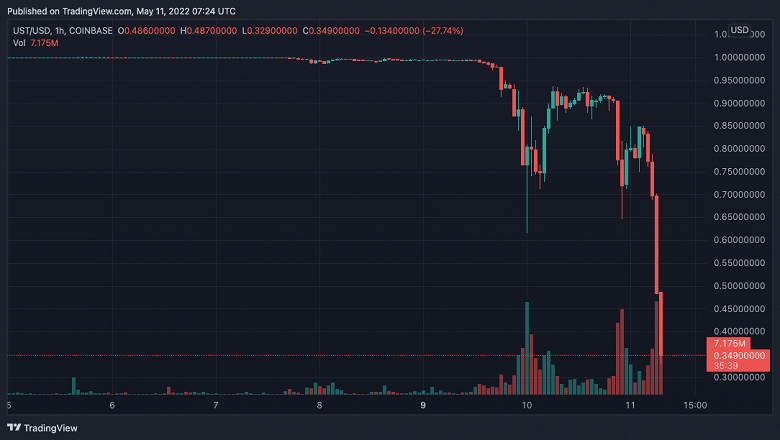 As of now, the Luna Foundation has sold all of its BTC reserves and is looking for at least $1 billion to support UST.

On this issue, negotiations are allegedly already underway with potential investors, including Alameda. At the same time, the coin is not the only one that is experiencing difficulties – the altcoins of the Cardano and Polkadot projects, for example, lost 11.5% and 12.5% ​​of the price, respectively, against the backdrop of a falling market.