The most powerful video card, but for a lot of money. The first prices for the GeForce RTX 3090 Ti appeared 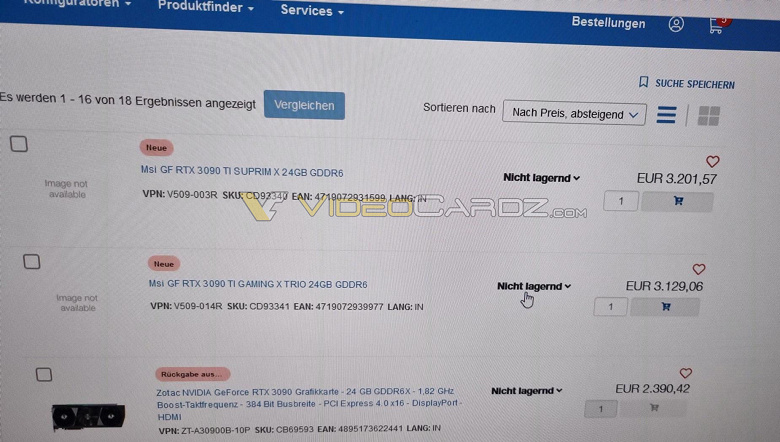 The GeForce RTX 3090 Ti graphics card is likely to be without reservation the most powerful graphics card on the market. But how much will you pay for this in an era of scarcity and markups?

As the first offers show, approximately from 3600 to 4500 dollars. Video cards have already appeared in a number of European stores, where you can see just such a price range. Moreover, almost all prices relate to the MSI Suprim X model, it’s just that prices vary greatly in different countries and different stores.

Of course, there will be other adapters that can be purchased somewhat cheaper, but in general, the order of prices is already clear. Recall that the video card is still only expected to be on sale, and there is evidence that Nvidia has postponed the launch.

After numerous reports that the new entry-level AMD graphics card will go on sale for at least 300 euros, the source has finally received confirmation in the form of real retailers offers. Prices were even higher than expected.

More specifically, the price of Radeon RX 6500XT video cards in French stores is twice the price recommended by the manufacturer. The Gigabyte RX 6500 XT EAGLE (without OS) can already be found at prices ranging from 351 to 378 euros.

In case anyone forgot, we are talking about a Navi 24-based card with 1024 shader units, equipped with 4 GB of GDDR6 memory connected to a 64-bit memory bus. The card is equipped with a PCIe Gen4 x4 interface and does not have AV1 decoding and H264/265 encoding. According to AMD’s calculations, the RX 6500XT will have to compete with Nvidia’s GeForce GTX 16 series models, which currently sell for between 260 and 300 euros.

The start of sales of the new flagship Nvidia GeForce RTX 3090 Ti graphics card, which debuted at CES 2022, was expected next week, however, according to the latest rumors, the novelty has been postponed due to hardware and BIOS problems. However, manufacturers are starting to add these video cards to their product catalogs on their official websites. This is what MSI did, which gives us the opportunity to evaluate the characteristics of the GeForce RTX 3090 Ti. 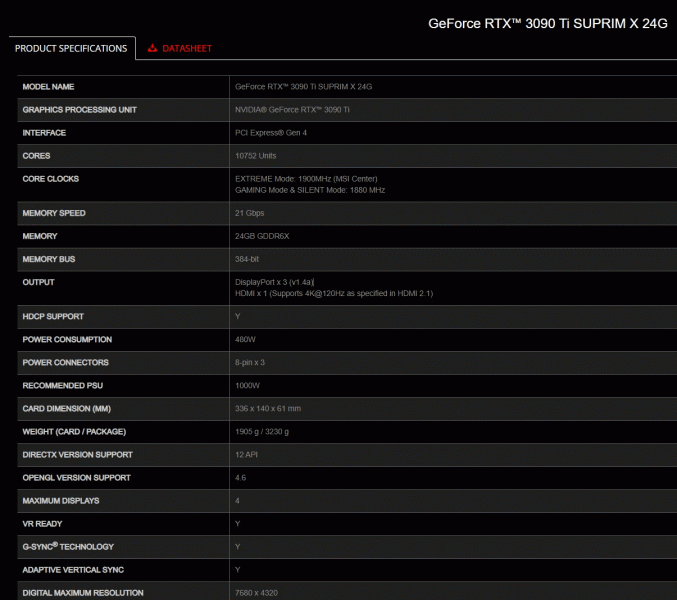 21 GHz memory has already been mentioned, but another interesting point concerns the power subsystem. The GeForce RTX 3090 Ti was credited with a new 16-pin connector, transmitting power up to 600 watts. But MSI decided to use three standard eight-pin connectors in the GeForce RTX 3090 Ti Suprim X. Apparently, this was done for better compatibility with current power supplies in PC gamers.

Finally, another important point: the power consumption of the GeForce RTX 3090 Ti is 480W! That’s 30W more than the current flagship. For a couple of hours of playing, such a video card will wind up 1 kW on the energy meter. Accordingly, the power of the recommended power supply is also 1 kW. The last thing to note: the weight of the video card is 1905 grams – 10 grams more than the GeForce RTX 3090 Suprim X.