Like Apple MagSafe, Android only. There were images of wireless chargers Realme MagDart

The first images of Realme MagDart wireless chargers have appeared on the web. Let us remind you that the company has recently registered the corresponding trademark.

MagDart is the analogue of Apple’s MagSafe for iPhone 12. Apparently, Realme will be the first to do this for the Android market.

On the renders, you can see two different charges. The former is even visually similar to MagSafe and should provide 15W of power. The second is already a large docking station with cooling and an additional USB-C port. Such a model is expected to support 65W or higher ultra-fast charging. Of course, the main issue is not the charging itself, but the presence or absence of magnets in smartphones. And there is no information here yet. 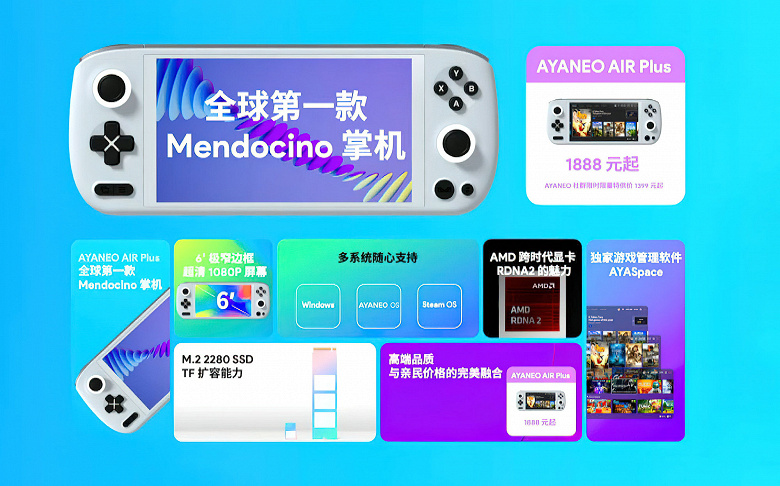 It looks like AMD has already revolutionized the handheld gaming market, it just takes time.

The other day we were talking about the new Ayn Loki console, which, starting at $500, will be based on Ryzen 6000, which means that in terms of performance it may even be better than Steam Deck. Now we can say that the Valve console is probably no longer the leader in terms of price and performance. At least in absentia.

Ayaneo has unveiled the Air Plus, which will start at just $290! And already for this money, the performance should be quite high.

The console will be based on AMD’s Mendocino APUs, which the company showed at Computex. They combine four processor cores on the Zen 2 architecture and a GPU on the RDNA 2 architecture. That is, this is the same set as the APU in the Steam Deck. AMD itself focuses these processors on cheap laptops, but no one bothers using them to create pocket set-top boxes.

Unfortunately, we do not yet know the details about the GPU configuration of such APUs, so we cannot confidently say that Ayaneo Air Plus will be more productive than Steam Deck, but it is likely that they will be at least on the same level.

True, there is one important nuance. The Air Plus’ six-inch screen will be Full HD, which is a much more significant load on the GPU compared to the Valve console. But at $290, there’s hardly anything to complain about. Suffice it to remember that now these consoles with older processors cost $ 1,000 or more.

It remains to be added that Mendocino APUs will be released in the fourth quarter, so consoles based on them will appear at least at the end of the year.