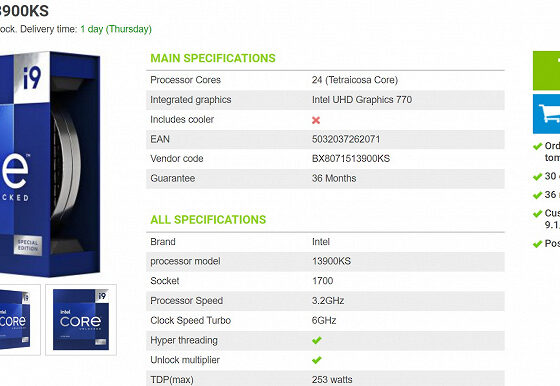 Intel’s unique 6 GHz CPU can already be bought for 800 euros, although it has not even been presented yet

Intel unveiled a host of Raptor Lake processors yesterday, but didn’t announce its ultimate Core i9-13900KS, which stands out with a base clock of 6GHz. The CPU is not yet on the company’s website, but this does not prevent it from appearing on sale in different parts of the world.

First, the novelty was noticed in China, then it appeared in France, although even there they ask for almost 950 euros for the processor. But in the Netherlands, the novelty can already be bought for 800 euros.

Of course, this is still a lot, but Core KS models have always been positioned as niche solutions for enthusiasts, because in practice the difference with conventional flagships is always minimal. The difference in price with the Core i9-13900K in this particular situation reaches almost 125 euros, and the Core i9-13900KF is cheaper than the novelty by all 144 euros.

Earlier there were rumors that the Core i9-13900KS will debut in February.