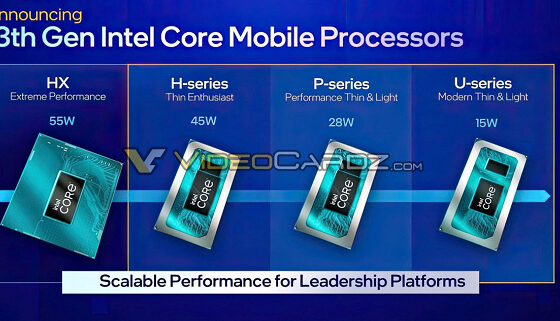 In addition to most of the Raptor Lake desktop lineup, Intel also introduced new mobile processors.

In total, five lines were announced from the super-efficient 55-watt HX to the new N-series in terms of naming, which replaced the Celeron and Pentium models, among others.

We will talk about all the new products, but in this news we will focus only on the older HX. This line is interesting for the reason that these are actually desktop processors placed in a mobile format and limited in power. In particular, the top Core i9s offer the same 24 cores as the desktop Core i9s. Of course, there are no tests yet, but there is nothing like this in the mobile segment and there never was.

Separately, it is worth noting that 55 W is a very conditional indicator. Actually, Intel’s TDP indicator has long been far from real power consumption, but here the company itself indicates the maximum consumption value of 157 watts.

You can also single out the Core i7-13850HX separately, as it has an unusual configuration with 20 cores, of which 8 are large and 12 are small.

Core HX, like their predecessors from the previous generation, will be actively used in gaming laptops, and there is no evidence yet that AMD will be able to offer something similar in the mobile segment this year.