Gigabyte’s catalog has been supplemented by the Z590 Aorus Xtreme Waterforce motherboard. Targeting the PC enthusiast, it supports 11th Gen Intel Core (Rocket Lake) processors slated for release on March 30th. The description of the board is impressive, but it’s worth remembering that everything comes at a price. Although the manufacturer does not name the price, it will probably be comparable to the price of the Asus ROG Maximus XIII Extreme Glacial model, equal to 1,500 euros.

The motherboard on the Intel Z590 Express chipset is equipped with a water block to remove heat from the processor and nearby power components. An indicator is built into the water block cover to display the temperature of the coolant and the processor. The second water block cools down the system logic set.

By the way, the power supply subsystem is built according to a 21-phase scheme (20 + 1) with digital control, a “smart” power stage, the load capacity of which reaches 100 A, and an array of polymer tantalum capacitors.

Next to the LGA 1200 processor socket are four DDR4 DIMM slots.

The board has three PCIe x16 slots. One of them works in x16 mode, but switches to x8 mode if an expansion card is installed in the second slot, always working in x8 mode. These two slots are PCIe 4.0 compliant (PCIe 4.0 support is processor dependent). The third slot complies with the PCIe 3.0 specification and always operates in x4 mode. PCIe 4.0 x4 signals from the processor are also routed to one of the three M.2 slots. Two more M.2 slots are connected to the chipset. They can accommodate PCIe 3.0 or SATA 6 Gb / s SSDs. There are also six SATA 6Gb / s ports for connecting drives.

The board is equipped with two Thunderbolt 4 ports routed to USB Type-C connectors on the I / O panel with support for USB 3.2 Gen 2, eight USB 3.2 Gen 2 ports routed to USB Type-A connectors, and two USB 3.2 ports Gen 1, which are routed to the pin header on the board. In addition, there are 10 GbE and 2.5 GbE network ports, WiFi 6E 802.11ax 2T2R wireless connectivity, and Bluetooth 5.2.

Of course, the board has an abundance of temperature sensors, connectors for fans and backlights, and other little things, useful and not so useful.

The last “enemy” PC in Apple’s lineup will soon be replaced. The new Mac Pro will receive SoC M2 Extreme 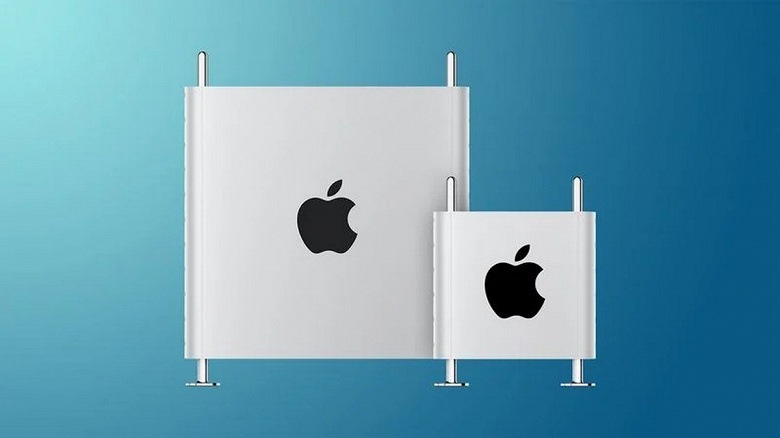 The last PC in Apple’s range will move to the Apple Silicon platform in the foreseeable future.

Journalist and insider Mark Gurman says Apple is working on the M2 Extreme SoC that will power the all-new Mac Pro. If we talk about the current line of Apple PCs, this is the only model left on the Intel CPU. You can also remember the iMac Pro, but now Apple does not sell it at all, and it is unclear whether this model will ever return in a new form.

Two platforms are being prepared for the new Mac Pro: M2 Ultra and M2 Extreme. Whether the M2 Extreme will be two M2 Ultras combined is still unclear, but the M1 Ultra is two M1 Maxs combined. In any case, of the new SoCs, Apple has only M2 so far.

If you recall the early data, then the Mac Pro was credited with a platform with 40 processor cores and 128 GPU cores. This is just twice as much as the M1 Ultra.