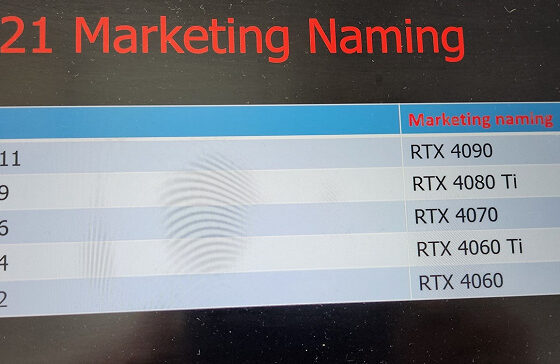 GeForce RTX 4090 will appear in laptops. Together with it, four more models will be in the Ada Lovelace mobile GPU line

Rumors that Nvidia is preparing a line of GeForce RTX 40 mobile GPUs have been around for a long time, and now another evidence of this has appeared on the Web. The slide below lists the models of the entire series.

When will the premiere of mobile Ada Lovelace, no data. Perhaps Nvidia will introduce them at CES 2023 in January 2023.

Earlier, Kopite7kimi reported that the RTX 4090 will be twice as fast as the RTX 3090, and also confirmed its main characteristics. Before that, he announced in what order the RTX 40 video cards would be released, and also spoke about the characteristics of the RTX 30 line.