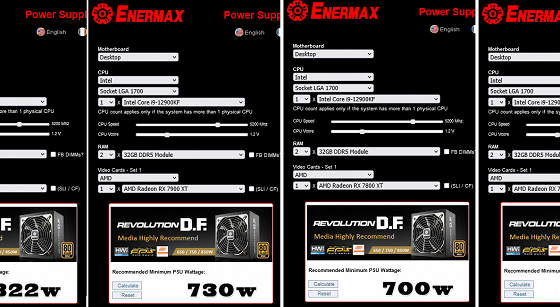 For a PC with a Radeon RX 7950 XT, you will need a power supply with a capacity of about 800 watts. Such data is demonstrated by Enermax software

In this case, we can distinguish two aspects: the names of 3D cards and the power of the PSU, according to the recommendations of Enermax.

So, the software says the AMD adapters will be called Radeon RX 7950 XT, RX 7900 XT, RX 7800 XT, and RX 7700 XT. That is, the principles of naming company cards will not change. It can also be assumed that these four adapters will be released either at the same time or with a short time interval, but this is not necessary.

Thus, we can conclude that the power consumption of the respective Nvidia and AMD cards will be close to each other.

The announcement of the new Radeon adapters is scheduled for November 3rd.