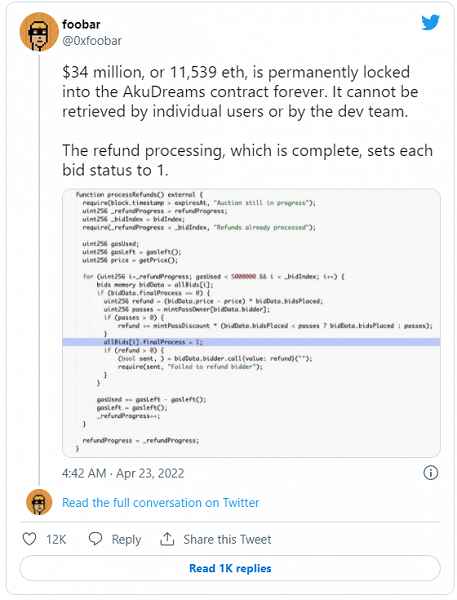 Due to a bug in the code, users of the Dutch auction of the NFT project AkuDreams lost 11,539 ETH

Due to a mistake by AkuDreams programmers, the Dutch auction of the NFT project ended with the loss of user funds. Over 11,539 ETH (~$33.93 million) were permanently locked in the smart contract.

“$34 million, or 11,539 ETH, is permanently locked in the AkuDreams smart contract. They cannot be retrieved by individual users or the project team,” wrote the developer under the nickname 0xfoobar.

At the end of the auction, the losing participants were supposed to withdraw their ETH, but due to an error in the contract logic, they cannot use the emergencyWithdraw() function responsible for withdrawing funds.

According to 0xfoobar, the project team is also unable to withdraw assets “because of incorrect increment math.”

The AkuDreams team confirmed the bug and stated that the incident was due to a “non-malicious exploit”. The founder of the NFT project Gangster All Star, 0xInuarashi, explained that “someone was able to break processRefunds() by placing a bet from a contract.” 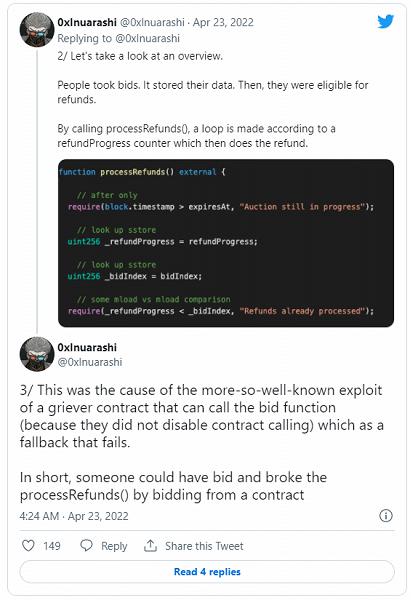 To the credit of the site, the developers of AkuDreams promised that they would compensate for the losses of users (0.5 ETH for each victim). The refund will be made on Monday or Tuesday – for this, the reserve of the project treasury will be used.

Get the right developers for your projects.