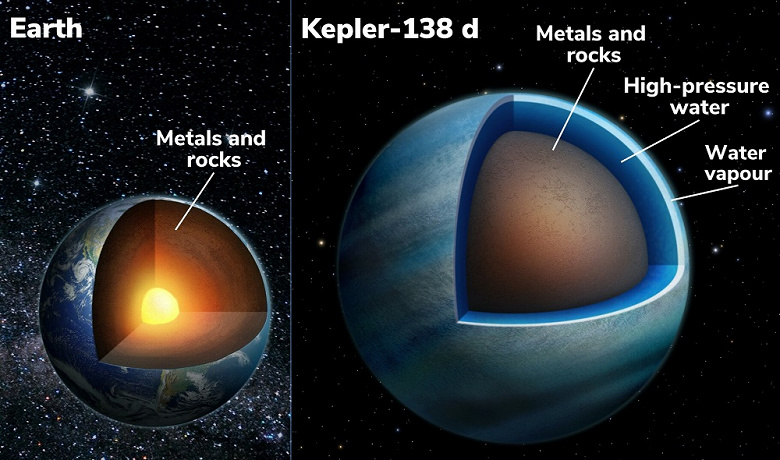 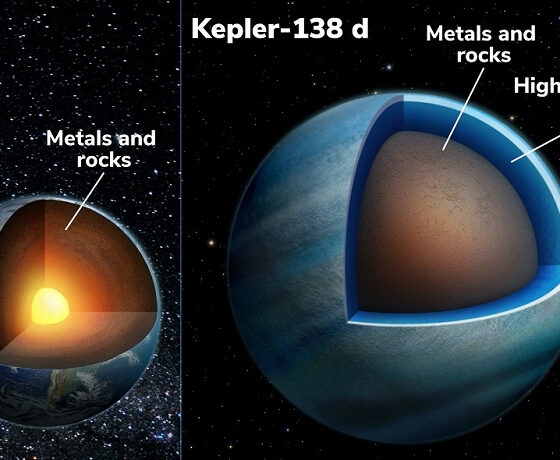 Astronomers have found exoplanets made up mostly of water

Scientists from the University of Montreal (Canada) have found evidence that the two exoplanets they are studying are “water worlds”. These planets orbit a “red dwarf” in the constellation Lyra at a distance of 218 light-years from the solar system. Astronomers have observed the exoplanets Kepler-138c and Kepler-138d with the Hubble and Spitzer space telescopes and have found that these celestial bodies may consist mainly of water. Water has not been directly detected, however, comparing the sizes and masses of the planets with existing models, scientists have come to the conclusion that a significant part of their volume – up to half – must consist of a substance that is lighter than stone, but heavier than hydrogen or helium, which make up the bulk of gaseous giant planets like Jupiter. It is logical to assume that the most likely substance in this case is water.

According to team leader Bjorn Benneke, it used to be thought that planets slightly larger than Earth were large balls of metal and stone, like larger versions of it, which is why they got the name “super-Earth”. The volumes of Kepler-138c and Kepler-138d are more than three times that of Earth, and the mass of each planet is twice that of Earth. They most closely resemble larger versions of Europa or Enceladus, the water-rich moons orbiting Jupiter and Saturn, but these exoplanets are much closer to their star. Instead of an icy surface, Kepler-138c and Kepler-138d should contain large shells of water vapor, scientists say. “This is the first time we have observed planets that can be identified with certainty as water worlds,” Bennecke said.

Planets may not have the oceans we’re used to on Earth, researchers warn, as temperatures in their atmospheres are likely above the boiling point of water. They expect Kepler-138c and Kepler-138d to have a thick, dense vapor atmosphere that could potentially contain high-pressure liquid water or even water in the supercritical fluid phase that occurs at high pressures. Interestingly, another team from the University of Montreal recently discovered another water world, a planet called TOI-1452b, which could potentially be covered in an ocean of liquid water. To study its atmosphere and confirm this assumption, a study using the James Webb Space Telescope will be required.