At the end of yesterday’s trading day, the stablecoin UST issued on the Terra blockchain lost its peg to the dollar. The token exchange rate from one (US dollars) sank by 40% to the level of 0.6%, which forced the developers to take emergency measures.

It is worth noting that UST is an algorithmic decentralized stablecoin (stablecoin), which means that its peg to the dollar is not supported by centralized institutions such as Tether (USDT). The mechanism requires burning LUNA to “mint” UST (and vice versa).

UST is currently valued at approximately $0.87 and has a market capitalization of $14 billion. At the same time, LUNA managed to recover slightly from the low of $23.48 and is now trading around $30.73 per unit. 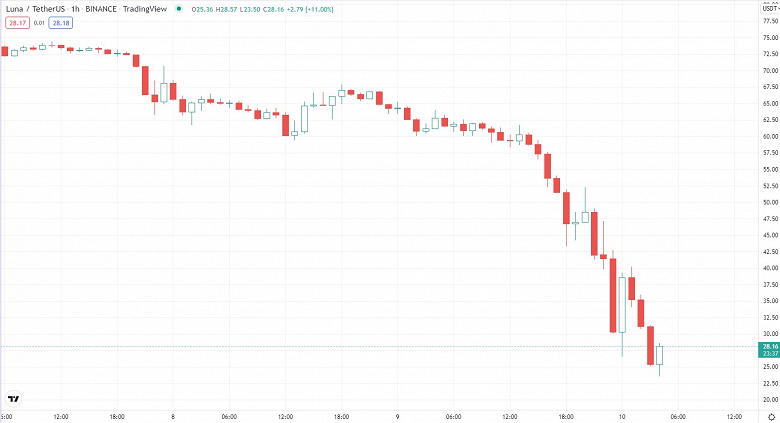 Since the market capitalization of LUNA turned out to be lower than UST, this may indicate that the Terra project itself does not have enough funds to maintain the price of the algorithmic stablecoin and its peg to the dollar. In turn, the Luna Foundation Guard (LFG), which is responsible for maintaining the peg of UST to the US dollar, took over damage control in order to mitigate further losses as much as possible and bring the stablecoin back to $1. Since the value of LUNA and the UST peg itself have been volatile, yesterday LFG floated a total of $1.5 billion worth of Bitcoin as a means of adding much needed liquidity to the ecosystem. LFG has made loans to several trading companies to protect the UST peg.

LFG had approximately 167,081 BTC worth a total of $3.5 billion as of May 5th when they announced they were acquiring an additional 37,863 Bitcoins. However, it is not known whether Bitcoin can prove to be a completely stable pillar for a stablecoin. By using its Bitcoin reserves to protect the dollar peg, Terra also exacerbated a deeper market decline. Earlier today, the world’s largest cryptocurrency fell to a new yearly low of $29,731.