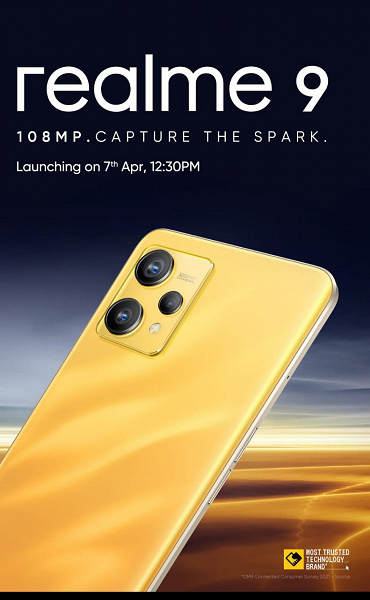 A good camera phone doesn’t have to be expensive. Full specs of $200 Realme 9 4G with 108MP camera

In three days, Realme will launch the Realme 9 4G smartphone in India, and it could prove to be an iconic model for those who mainly care about the camera in a smartphone. The thing is that Realme 9 4G is credited with a 108-megapixel sensor of the latest generation Samsung ISOCELL HM6. Considering that the cost of the model is predicted to be only $200, this is a fundamentally important point for such an affordable device.

Alas, the module with this sensor will not have an optical stabilization system, but even without this, the presence of 108 megapixels in a $ 200 smartphone is good in itself. There will also be an 8-megapixel sensor paired with an ultra-wide-angle lens, and a 2-megapixel sensor for macro photography. The front camera of the model is with a 16-megapixel sensor.

Realme 9 4G will receive a 6.4-inch Super AMOLED screen with Full HD + resolution, 90 Hz frame rate and 1000 cd/m2 peak brightness. The fingerprint scanner will be built into the screen, and it will support heart rate detection on touch.

The hardware platform of the novelty will be based on the Snapdragon 680 SoC, coupled with 6-8 GB of LPDDR4X RAM and 128 GB of UFS 2.2 flash memory. The battery capacity will be 4500 mAh, charging power – 33 watts. The operating system will be Android 12 with Realme UI 3.0 interface. The thickness of the smartphone will be 7.9 mm, weight – 178 grams.