A brand new AMD processor has been spotted for the first time in the benchmark. Desktop Ryzen 7000 GPU Confirmed

Already in September, according to the latest data, desktop processors Ryzen 7000 of the Raphael generation will enter the market. And today one such CPU lit up in the benchmark.

Its name is unknown, but it is an eight-core solution with SMT support and a frequency of up to 5.21 GHz. For AMD processors, this is a huge value. In comparison, the Ryzen 9 5950X peaks at 4.9GHz.

In addition, for the first time it is confirmed that such processors will receive an integrated GPU. Such rumors have already been, but they were confirmed only now. That is, all desktop Ryzen 7000 will have a graphics core. 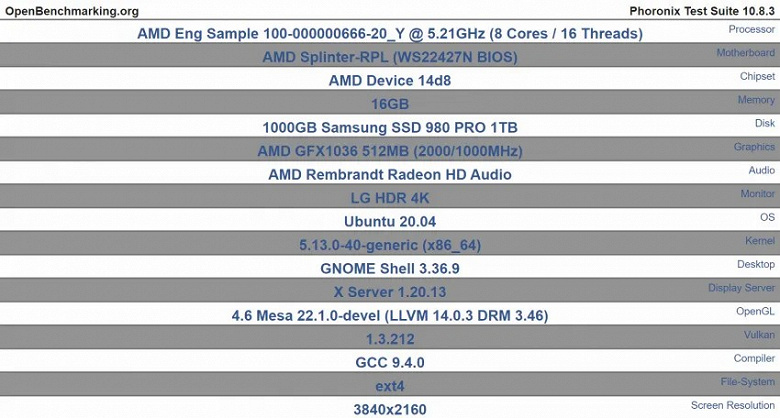 Raphael’s integrated graphics are identified as GFX1036, which is part of the same GFX1030 branch as Beige Goby, Yellow Carp, and Van Gogh, all of which are RDNA 2 iGPUs. That’s why the Radeon Audio iGPU controller is identified as Rembrandt. Recall that this is the code name for the Ryzen 6000 series of mobile processors.

The benchmark results are of little interest to us, since they are very modest. Probably, the engineering sample under load worked at low frequencies.