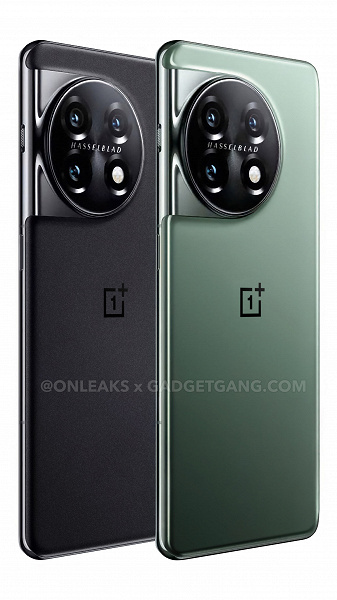 A new rendering of the promising flagship OnePlus 11 has appeared on the Web. The device poses in two colors: green (Forest Emerald) and black (Volcano Black). The image shows well the redesigned Hasselblad camera block with a large round protrusion, inside of which there are four more rounds, but only in three camera modules, and in the fourth – a flash.

According to preliminary data, this phone was supposed to be released as OnePlus 11 Pro, but later it was decided to present it as OnePlus 11. However, by the time of release, the creators may change their mind: the premiere of the device is expected only in the first quarter of 2023.

The list of preliminary parameters of the new OnePlus flagship includes a 6.7-inch AMOLED screen with QHD+ resolution, Snapdragon 8 Gen 2 SoC, up to 16 GB of RAM, Hasselblad camera with 50, 48 and 32 MP sensors, a 16-megapixel front camera, a 5000mAh with support for 100W wired charging. Earlier it was reported that OnePlus 11 may get a ceramic case.

A new render of OnePlus 11 was published by insider Steve Hemmerstoffer, known under the nickname OnLeaks. Previously, he leaked a lot of renderings of various phones to the Web before they were released, and all these leaks were subsequently confirmed. This was the case with the Samsung Galaxy S21, Sony Xperia XZ4, Google Pixel 4 XL, and more.